One morning back in 2001 Ian Richardson (House of Cards) and Derek Jacobi (I, Claudius) arrived at a small, charming cottage here in Christchurch to pay homage to the late Ngaio Marsh. They were following in the footsteps of many stars of stage and screen before them such as Laurence Olivier and Vivian Leigh. 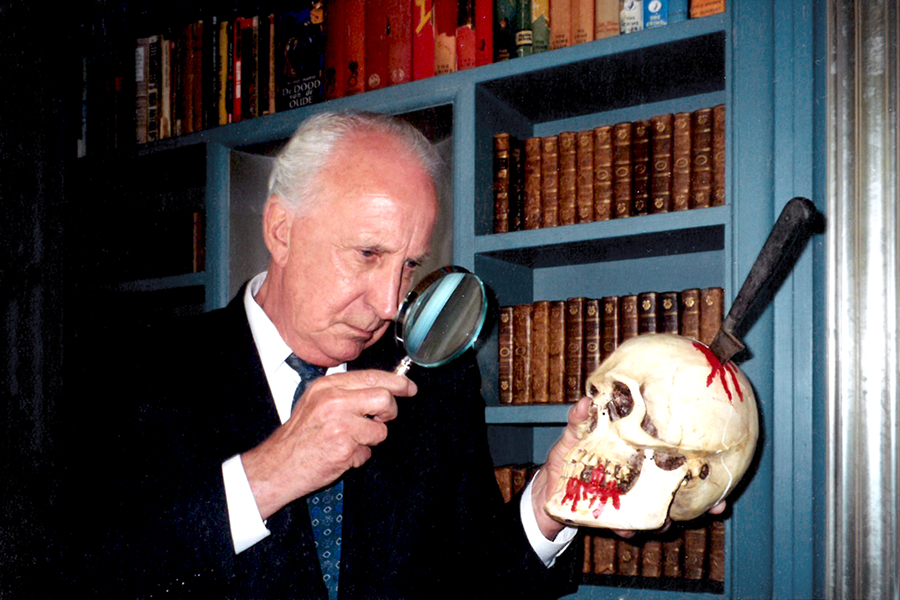 Just one of the many anecdotes told to me recently when I was given a tour of the cottage by Dr Bruce Harding, curator of Dame Ngaio Marsh House.

The Queen of Crime

Ngaio (pronounced Ny-e-o) Marsh is best known overseas as one of the four ‘queens of crime’, contemporary with Agatha Christie, Dorothy L Sayers and Margaret Allingham. My mother had many of her crime novels featuring Inspector Roderick Alleyn and I can still visualise them alongside Christie’s books in our revolving mahogany bookcase back in London. A snapshot in time, before TV, in the early 1950s.

Yet even before she became an award winning author Ngaio Marsh was an acknowledged talent, a gifted artist and theatre director. In fact it was for her contribution to the theatre here that she was made Dame of the British Empire. Her passion was Shakespeare. For over 40 years she lived between England and New Zealand directing live theatre and working as a writer.

I should stop before this becomes too biographical, there are many of those already and should you be interested I’d direct you to Bruce Harding’s for background material - after all, he was a personal friend of hers!

Instead I’ll try to convey what you might expect to see if you visit Dame Ngaio Marsh House or as it was named by her parents, Marton Cottage. Guided tours, highly recommended, can be arranged by appointment - see the end of this blog and discover this gem for yourselves!

Stepping back in Time

A sign on Valley Road directed me up hill along Sherwood Lane to Ngaio Marsh House. It's an easy short walk, the street noises faded away and I am left with only the sound of birds singing - so peaceful. Indeed when I first see the house in its garden setting there is a sense of timelessness and seclusion. 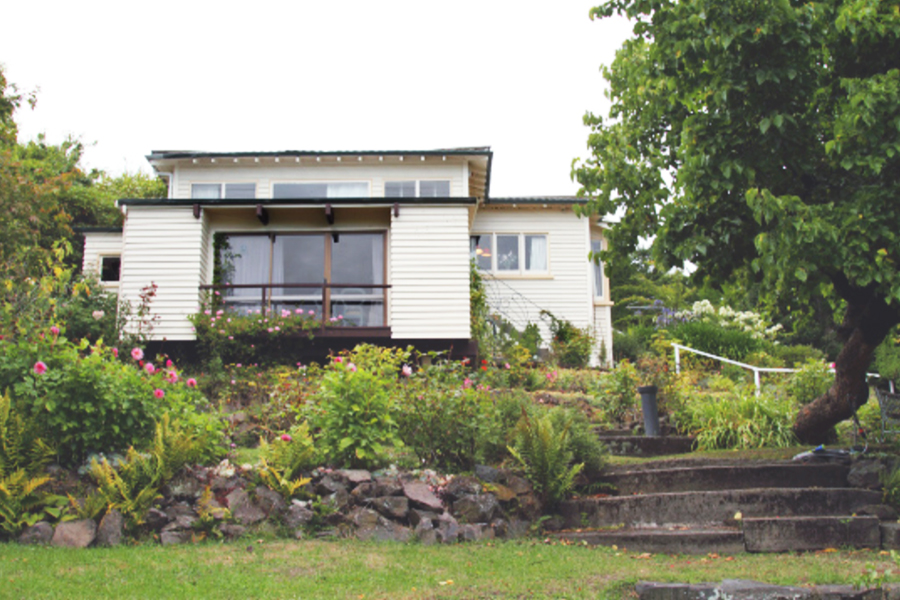 Even now the views across the plains to the Alps are lovely to see but decades ago they must have been dramatic when unobstructed by the trees. The house has been added to over the years but the areas that are open to the public are confined to the original cottage floor plan; the sitting room, kitchen, dining room and 2 bedrooms plus a workroom converted from the earlier laundry and coal store.

Which is perfect because these spaces are largely unchanged.

Ngaio Marsh grew up as an only child in Christchurch, moving into the new family home in Cashmere when she was 10 years old. The cottage is close by to Dyers House and both were built in 1906 when the Cashmere hills were mostly unpopulated, Ngaio and her parents camped in the grounds for months watching as the house was built and she must have got to know every part of the emerging construction. It was designed by leading Christchurch architect Samuel Hurst Seager, renowned among other things for his designs of the memorials overseas to New Zealanders killed in WW1 including Chunuk Bair at Gallipoli. Poignant right now with the approaching centenary of the armistice.

Bruce met me at the door and we were immediately into the dining room. 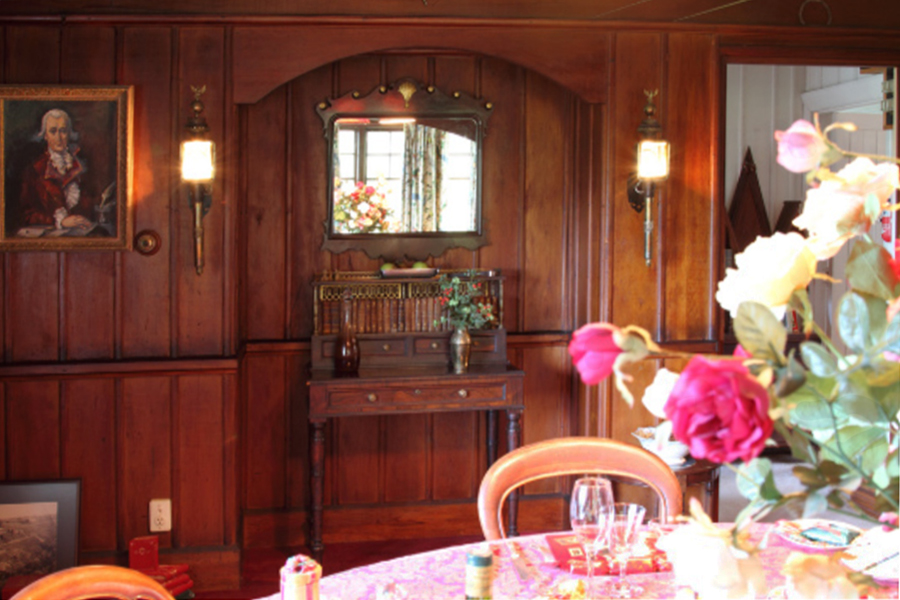 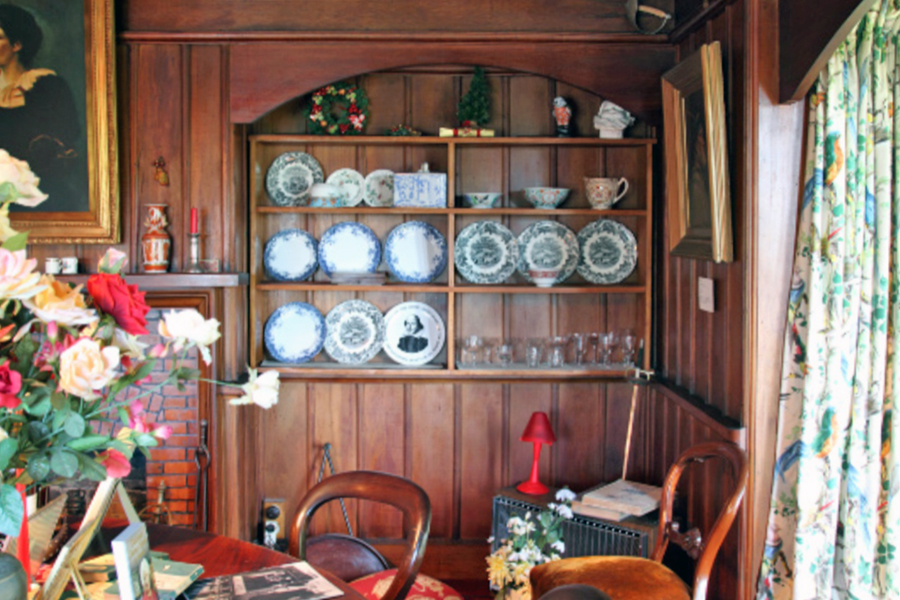 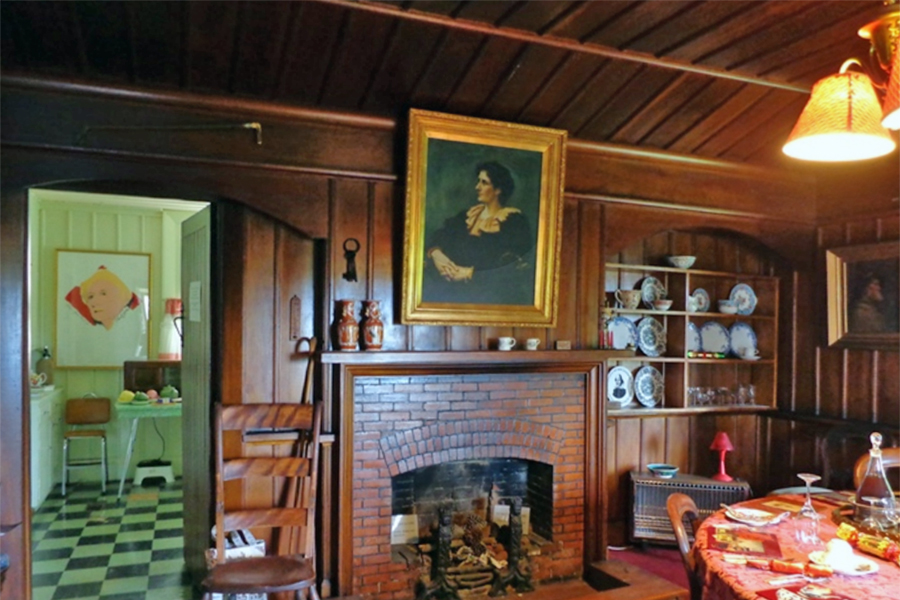 With its varnished wood ceiling, timber clad walls and stylish bay window surely it looks much the same as when it was first constructed over a hundred years ago. Strangely it reminds me of a captain’s cabin on an old sailing vessel, the robustness and warmth of all the dark varnished wood and the contrasting bright light streaming through that wonderful bay. All is shipshape, a place for everything and everything in its place. Ngaio loved to entertain and was known for her lunches here with friends and eminent visitors including many in all spheres of the arts. The dinner table is set for a Christmas meal.

As with her crime books, another prompt for me to walk down memory lane was to step into the kitchen; garbed in 50s formica and appliances it still retains the original pulley-drawn overhead rack cloth dryer. 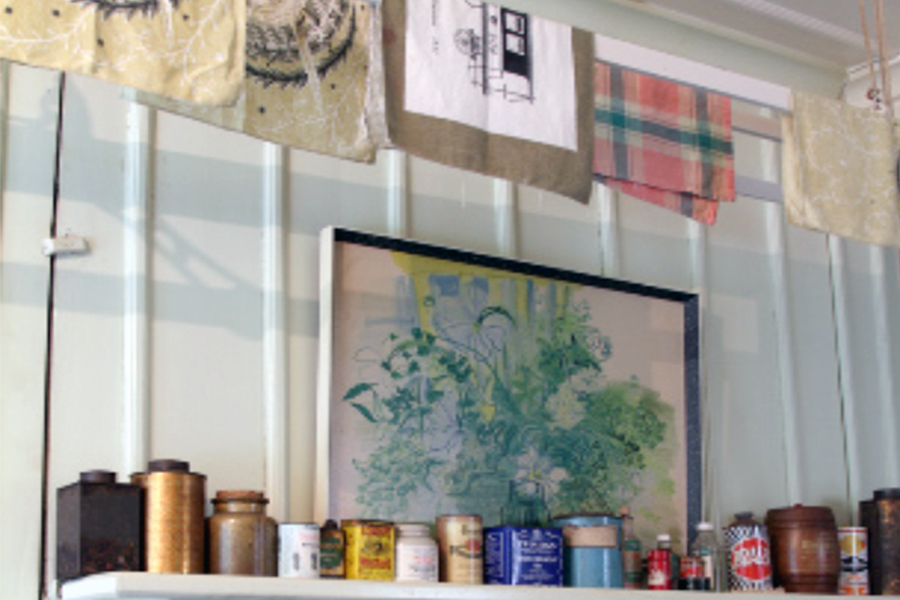 Into the Long Room

So named because it was formed by combining the original sitting room and second bedroom. Here Ngaio would write novels, plays, critiques for her secretary to type at the desk, while surrounded by her books, her awards, the souvenirs of her travels, photos and paintings - both her own as well as by others. 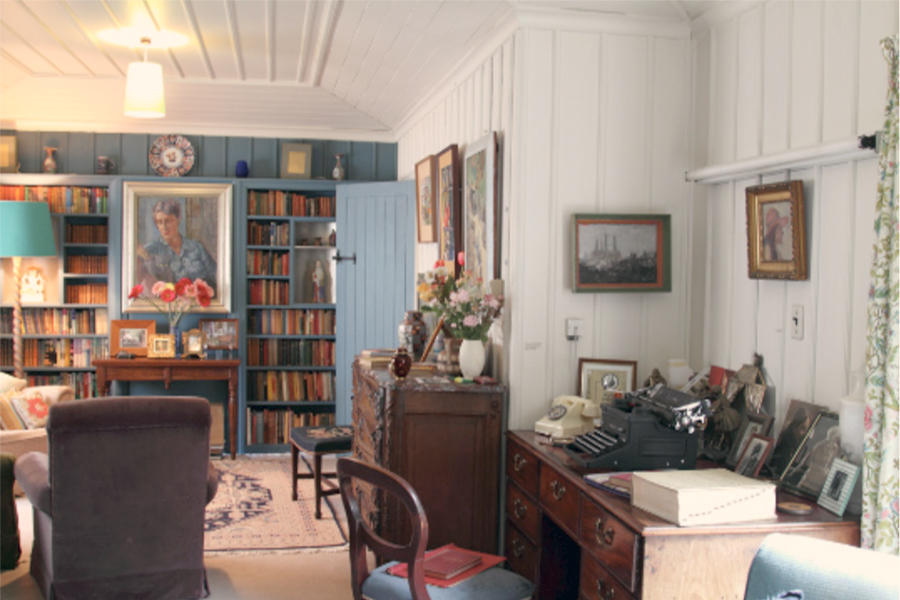 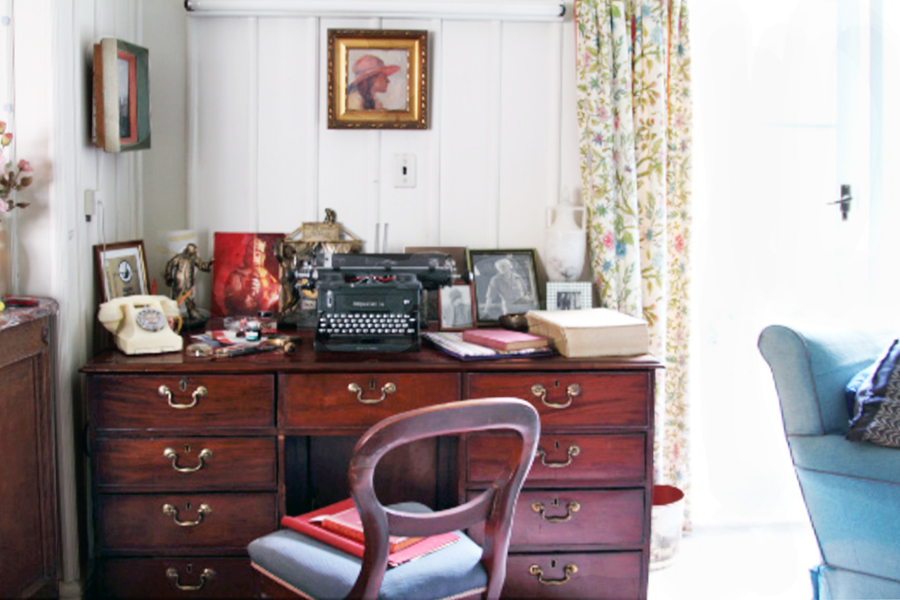 It’s here that I really get the character of this house and its contents. Like the dining room and kitchen before it the Long Room is crammed full of Ngaio’s personal possessions supplemented by contemporary items. They complete the picture of a highly accomplished and spirited woman and clearly of her time. This is a remarkable room, the sunlight was streaming through the windows that look out over the gardens and it must have been an inspiring setting to work in. 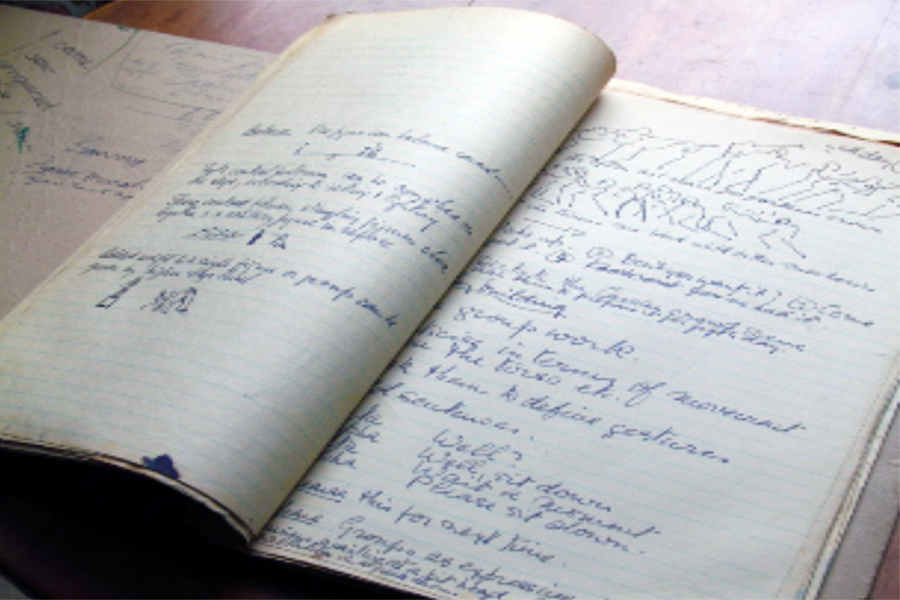 It’s an intimate space although I imagine that it hosted many lively group discussions!

Everywhere I look there is something that tells a story. The casually displayed photograph showing Ngaio and friends including a young baronet all dressed in their finest regalia posing for the camera. Tiaras are in abundance, the baronet is wearing a coronet and ermine-trimmed cape and they are about to head off to attend the coronation of King George V1 and Queen Elizabeth. Yet another insight to Ngaio’s life that Bruce casually describes in full detail, he paints the picture so well.

Although Ngaio Marsh lived in Marton Cottage throughout her life, she lived in London for long periods at a time spanning more than 40 years. She led a privileged life in London, mixing with high society, and her social circle ranged from artists to aristocracy.

However, my favourite photo would have to be that of Ngaio standing beside her much loved black Jaguar XK120, she was still driving it around Christchurch when in her 80s!

Ngaio’s bedroom and her studio completed my tour. The studio / workroom that was originally the laundry and coal store contains so much material that it looks like a reserve collection waiting in the vaults of a museum, or maybe the props backstage of a theatre? 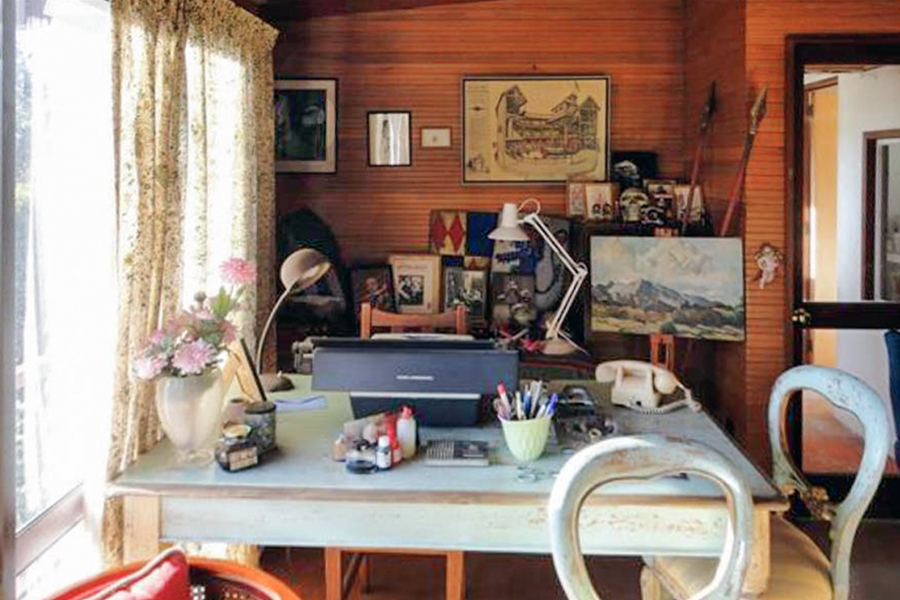 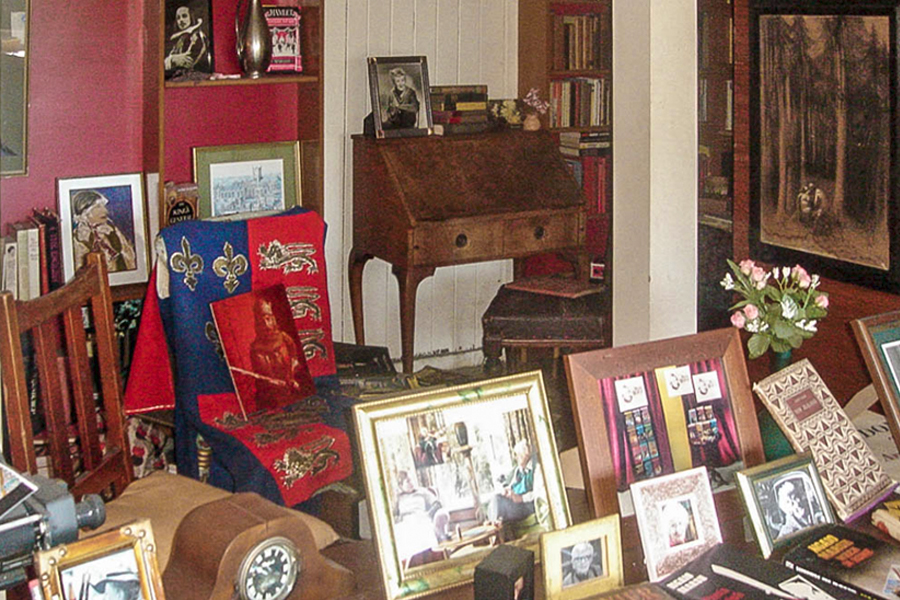 Bruce is the perfect guide for a tour such as this, knowledgeable, enthusiastic and able to convey much of Ngaio Marsh’s life, both personal and professional; his admiration of the lady is infectious. Nevertheless and despite how much of her life was on display I came away feeling that Ngaio was a very private person and that Marton was often her retreat from the world. If so she could not have found anywhere better.

An enigma wrapped in an Inspector Alleyn mystery.

Ngaio Marsh House is heritage listed and situated in Sherwood Lane, signposted off Valley Rd, in Cashmere. Visits by appointment only. For further information, go to ngaio-marsh.org.nz.

We are happy to book a tour for any of our guests, and would strongly recommend booking well in advance because the tours are operated by volunteers and timings have to be arranged.

The captioned photos are my own, my thanks for the opportunity to use the others which are courtesy of the Dame Ngaio Marsh House and Heritage Trust and were taken by Kelly Shakespeare - how fitting!

Angela is back for the next diary entry, currently she is rather busy organising a wedding to be held here this weekend! :-)